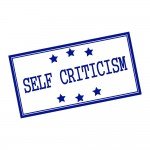 Self-critical thoughts are those negative words that prick and burst your balloon of confidence.

However hard you try to squash and suppress them they can still pop up at the worst times.

A client of mine, who is an excellent and committed teacher, found that her critical thoughts appeared whenever she was observed or appraised. The negative voices would start immediately and could be:

“Why did you say that, they’ll think you’re stupid?” or “This lesson is so boring, you’re really not a good teacher“.

She would try to ignore this storm of thinking or try to think positively, but it never worked so she came to see me.

Research has shown that the more you try to stamp down these critical thoughts the stronger they become (ironic rebound).

So what can you do instead?

This process will release you from being weighed down by your negative beliefs. Although it won’t stop self-critical thoughts they will have less hold over you.

Please share this article with someone you think will benefit and if you haven’t already do sign up for my ‘Top 10 Tips To Improve Your Confidence’.

For Email Marketing you can trust.

Boost Your Confidence By Letting Go Of Self-Criticism

I often read in self development articles how important it is to accept myself as I am, with all my weaknesses and strengths. I understand that all of us are flawed and that’s what we have in common as well as what makes us unique. Reading this however is the easy part, actually learning to…

If you’re a friend with me on social media then you’re probably fed up with me talking about being on Sky News this week, but there is a reason for me to mention it again today. I was randomly called on Tuesday evening and asked to appear the following morning to discuss the findings of…

It’s constantly in the press about the gender pay gap and how as women we’re making great achievements in our careers but not always being equally paid for it. One of the reasons given for this is that as women we are less likely than men to put ourselves forward for promotions or negotiate for…

Have you ever had that overwhelming feeling that you’re not being your best, whether at work, as a wife, friend or mother?   That’s such a common stick that as women we use to beat ourselves. Expecting to achieve high standards in every area of our lives, all at the same time.   Logically we know…

Have you ever wondered what a Life Coach does? My colleague Life Coach Carol Ann Rice has put together 12 great  points to  explain it to you. 12 Things You Never Knew About Life Coaches; We don’t give advice. We coach people to find their own answers in a way that feels right for them….