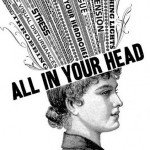 People who lack confidence, and women in particular, are often living their life inside their own heads. This means that a lot of the things they believe is happening in their world, isn’t really.

A client of mine, we’ll call her Sue, was an expert at creating her own environment and as a result had lost confidence socially, at work and in relationships.

If she was out socially she’d be so focused on what other people were thinking about her, and how negatively they were judging her, that she’d become tongue-tied and unable to have a conversation.

At work she would stress about what would happen if she made a mistake or didn’t get work finished on time. In her head this would lead to disapproval, upset and eventually losing her job. Even though she’d had good feedback from bosses, in her mind she was just a small step from unemployment.

Sue has had relationships but because they failed she worried that she won’t find anyone. When she started a new relationship she constantly made assumptions about what her boyfriend was thinking or what his actions might mean. This caused her to waste a lot of time and energy and not to relax and be herself.

I worked with Sue on being aware of when she is creating her own world and making assumptions. From this she could then start to challenge whether her thoughts had any evidence or logic or whether they were actually just her negative thinking.

3 other tips that helped Sue are:

Over time Sue has learnt how to distract, challenge or not listen to herself when these thought storms start. This has enabled her to trust and believe in herself more and her increased confidence means she enjoys life far more.

If any of this sounds like you and you’d like to learn more about boosting your confidence then do contact me for a free 30mins chat or sign up for some great confidence building blogs.

How To Get Out Of Your Head And Feel More Confident

If you’re a friend with me on social media then you’re probably fed up with me talking about being on Sky News this week, but there is a reason for me to mention it again today. I was randomly called on Tuesday evening and asked to appear the following morning to discuss the findings of…

Body image anxiety is nothing new. For hundreds of years women have been bombarded with images of fashionable bodies and ways to achieve them. Today we have considerable choice and freedom of expression. It’s never been easier to find fashion that fits our shape and size. Yet more than ever women are anxious about the…

Those of you whom I have known for a while will probably be aware that I have suffered with chronic back pain for years. In one of my many attempts to help myself I went to see a nutritionist who put me on an anti inflammatory diet based around the Paleo diet. I’ve been on…

Confidence is our Natural State If you feel that you are low in self-confidence, then it’s likely that you believe you’ve always been that way. You may know that other factors will have influenced your confidence level, such as your parents, school, friends and society, but that’s just the way you are. I want to reassure…

How a ‘Worry Period’ can reduce your anxiety Worrying is a natural and normal part of everyday life, however if you are a chronic worrier, you will find your mind is constantly racing. Even if you try to ignore the thoughts, distract yourself or be positive they often stay in your head. You may also…