Today’s blog is all about how to work with colleagues who seem to be manipulative or obstructive but never actually confront you face to face.

This sort of behaviour is known as passive-aggressive. The person will appear to agree with you on the surface but you’ll pick up that they’re not happy. They may then cause you problems by undermining you with little comments or ignoring what you asked or side lining you. 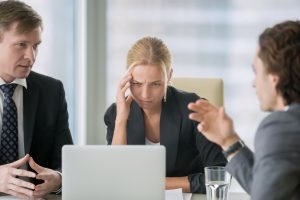 If you have a colleague like that then you may be surprised at the best way to deal with them.

I once worked with a passive-aggressive colleague who never actually criticised or disagreed with me face to face. Instead she made life difficult and incredibly frustrating for me. She’d agree to actions in a meeting and not deliver on them. In front of senior managers she’d be very supportive, but away from them she’d not even give me a good morning.

What I found most annoying was the way she’d put in little digs at my ideas and achievements in front of others and never backed my suggestions.

I thought the best way to deal with it was to confront her, give examples and ask whether there was a problem. Instead of opening up a discussion she reacted by suggesting I was oversensitive and imagining it. That  triggered my defensive anger and left me looking like the aggressive one, which isn’t a response I’d recommend!

People who behave in this way aren’t usually the toxic slackers we think they are. Usually their behaviour is coming from a fear of expressing their emotions and getting into conflict. There can also be an element of self-centredness, assuming others should know what they want. That their feelings are more important than yours.

How do I deal with this?

Rather than responding to a passive-aggressive person from the hurt and frustration you’re feeling. Think of them instead as someone who is suffering and unable to share their emotions constructively.

1. Listen to what they’re not saying rather than how they deliver it – what is their underlying opinion?

2. Do you have any role in the situation? Reflect on how your behaviour could be contributing, even if it’s just your emotions ‘leaking out’

3. Have a calm conversation with them, using your emotional intelligence and asking questions to uncover their concerns or issues. Ignore any toxic elements to their delivery and keep the focus on the content

4. Try to avoid having an emotional response to their comments, as not only is this not productive but it may feed their behaviours.

5. Join with them to find a solution or discuss a compromise. They may just want to be heard and be open to options

6. You don’t have the ability to change their behaviour that’s upto them, but if it becomes extreme then do ask for help

7. Maintaining good working relationships with you colleagues is very important to your happiness at work, but sometimes whatever you do, it’s not possible. In those situations make sure you protect yourself by getting support from other colleagues, recording any incidents and ensuring your work performance isn’t affected.

If you’d like to know how you can confidently deal with similar issues in your work then do book a free call with me at www.speakwithjo.com and I’ll share with you some successful strategies.

I’m sure we can all think of someone we know who just seems to ooze confidence. Who seems comfortable in all situations and doesn’t appear to be nervous or self-doubting.     What is it that determines how confident a person is?   Confidence is multifactorial. The biggest influencers on your confidence levels are; your genetics,…

Being Grateful for the people, things and experiences in our lives is an essential element to feeling positive and happy. As described in the quote above, it is almost impossible to feel miserable and to be grateful at the same time. Try it for yourself, next time you feel a bit low make a list…

When I talk about resilience, people’s reaction is often to think about the British stiff upper lip and ‘pushing on through’.     But that’s not what resilience really is. To be resilient is to recover quickly from difficulties rather than to not be affected by them.   I can think of a number of difficulties…

Do you find yourself going over and over negative experiences that have happened or worrying about what could happen in the future? Perhaps you analyse everything you said or did in case you’ve upset somebody or in case others judge you for it? This analysing of situations and ruminating on negative thoughts and feelings is generally more…

Are you feeling stressed and overwhelmed at work? Do you get the Sunday pre-work blues or the Friday panic to clear your desk? You’re certainly not alone with those feelings. Research by Viking showed that over a quarter of UK office workers  reported feeling stressed every day and over half of these said that the stress…

Confidence coaching is now a proven and major part of both career and personal development.     As a coach, I see my role to be about creating a safe and comfortable space for clients to explore aspects of their career and lives. So they can see things from a  different perspective and overcome their issues…