I love this quote and here is the story of my client who learnt how to be assertive with a colleague who was undermining her expertise. 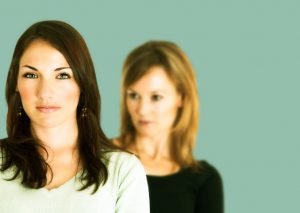 If you have ever had a member of your team dismiss your authority and undermine your expertise. Then you will know how Claire felt when she came to see me.

Claire was employed to work alongside a colleague at the same level when she first joined a large engineering company. Two years later a restructure led to her promotion, and the recruitment of two new team members to work with her old colleague Nick, managed by Claire.

Claire knew it would be difficult for Nick having to report to her and hoped that their previous relationship would continue.

Six months into the role and it was evident that Nick was not acknowledging Claire’s seniority. He would ‘hold court’ in team meetings; disrupting the discussion and undermining her expertise.

Claire had tried to manage the situation indirectly and by having a chat with Nick, but felt very uncomfortable to tackle the issue directly.

From our work together, she quickly identified her behaviour as passive-aggressive and understood that there were ways she could speak to Nick directly and still maintain their relationship.

Claire worked hard at developing her assertiveness and tried out several assertive statements to get Nick on board.
“I understand that a lot has changed since the restructure and we are all settling into our roles. I am working to develop our new team members and would appreciate your support in sharing your expertise with them.”

It’s not just the outcome that matters

Also “You have a lot of knowledge and experience in this department, which I value and I do consider it when I allocate projects. I need you to take responsibility for the delivery of the projects on time. Do you have any concerns about this?”

Nick did improve but was still affecting the team’s performance. Claire realised that she needed to be increasingly direct with her assertiveness to hit the ‘sweet spot’ with Nick. She also needed to take ownership of her role as a manager and worry less about her previous relationship with Nick.

She found this very uncomfortable, but with support has found her own way of approaching the issues assertively.
“Since our last discussion, I have noticed that in our team meetings, your contributions tend to be negative and undermine the ideas that the others and I suggest. Is there anything concerning you that is behind these behaviours?”

Nick did acknowledge that he could be more supportive, but he didn’t open up about any issues. As a result, Claire had to continue being direct in response to his performance, and eventually, Nick moved company.

Despite the outcome not being what she wanted, the whole situation was a significant development opportunity for Claire. She found her voice and now has no concerns about speaking up to her team or the top level of the company.

If you struggle to voice your opinions and needs and want to speak up without coming across as bossy or aggressive I’d love to have a chat with you and share with you how to achieve it.

You can book a free call with me at www.speakwithjo.com

I’m someone who is inclined to overthink and worry if I allow myself. So with the start of the New Year, I think it’s important to let go of those things that added emotional stress in the last year.   To give you some idea of what I’m suggesting, I’ve copied this list of…

Many of my clients with low confidence feel they have to put on a brave face for the world and not to show how vulnerable they feel. I’d like to tell you about one client in particular behind whose brave face there were a number of issues. From the outside Sarah had a great life;…

Curiosity is my favourite behaviour at the moment because focusing on curiosity creates confidence.   It allows me to see things from the other person’s perspective and to question why they interpret comments and situations in a different way.   By depersonalising the situation it means I don’t go down the “it must be all…

If you heard your colleagues whispering would you assume it’s about you? When your boss is in a bad mood do you worry it’s something you’ve done wrong? Then I’m sure you’re aware that you’re taking things personally .     One of the reasons we do this is because understandably, we are often at…

People who lack confidence, and women in particular, are often living their life inside their own heads. This means that a lot of the things they believe is happening in their world, isn’t really. A client of mine, we’ll call her Sue, was an expert at creating her own environment and as a result had…

Emotional eating is now a very common phrase and many women use it to describe their eating patterns. But what does it actually mean and how can you get it under control? Using food to avoid difficult feelings or to make you feel better does give a short term relief but often ends up making…