As you’re human, it’s highly likely that in some situations at work you have played one of these roles a rescuer, persecutor or victim. This drama triangle was first described by Stephen Karpman in 1961 and is used in psychology to describe the three ‘roles’ that we play and can get stuck in. 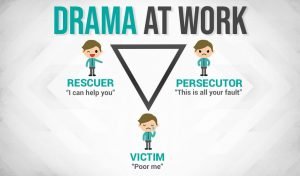 When you’re aware of these behaviours and how toxic they are, it’ll enable you to rethink your mindset in your relationships and at work. Do you ever take on these roles? Does anyone at work try to manipulate you to play rescuer, persecutor or victim?

The Victim: “I’m rubbish I give up”, “Everyone else is better than me”, “Whatever I do, nothing changes”. The victim believes life happens to them and they’re powerless to change the circumstances. They refuse to get help, make decisions and feel hopeless and misunderstood. They blame the persecutor for bullying them and look for a rescuer to validate their feelings.

The Persecutor: “This is all your fault!”, “You can’t do anything right” The persecutor is critical and dominating and comes from a place of anger and resentment. They fear becoming a victim themselves but their criticism rarely solves problems. Sometimes the persecutor can be a situation rather than a person.

The Rescuer: “Let me help you”. They work hard to help and support other people, whilst neglecting their own needs which can lead to them being resentful. Helping others makes them feel better about themselves, but they are often overworked and trapped in martyr mode. Without someone to rescue they can feel guilty and so may keep the victim in a co-dependent relationship.

We can move between these roles within a single conversation or our relationships can become fixed to a particular dynamic in the triangle. The problem is when you’re stuck in a version of these roles you don’t see the bigger picture and your part in keeping the triangle going.

So how do I move out of the triangle?

The only way to “escape” the drama triangle is to function as an “adult” and not participate in the game.
– John Goulet, MFT, Breaking the Drama Triangle

If you recognise yourself as a victim in a situation, you need to take responsibility for yourself and initiate self-care rather than look for someone to rescue you.

For a persecutor, it’s all about recognising that this is the behaviour you’re showing and owning it. Even if it makes you feel better it isn’t helpful or fair.

If you’re a rescuer then remember you can be helpful and supportive without rescuing. Real helpers don’t need something in return and empower a victim rather than keeping them in a victim mindset.

You can find lots more information on the Karpman Drama Cycle on this website www.karpmandramatriangle.com and if you’d like to explore your behaviours and how to change your role book a call with me at www.speakwithjo.com

Have a great week.

I’m not a big believer in positive affirmations. I find repeating phrases over and over to myself doesn’t work for me. However there are times when a positive statement can really give you a boost and help you carry on when you’re struggling.   So here’s a list of phrases I’ve found useful in overcoming…

The issue of women’s confidence at work has had so much discussion in the last few  years.   For example an American report in 2014 said that when women start working for a company, although 43% aspire to be in senior management, only 27% think they have the confidence to do so. After 2 years…

Today, I wanted to share with you a story about Socrates’ 3 questions and how they can help build your confidence. The story comes from this article by Marc and Angel     A couple of thousand years ago in ancient Greece, the great philosopher Socrates was strolling contemplatively around a community garden when a…

Only 7% of any message we want to communicate comes from our words, so we need to make sure that we sound more confident at work.     Regardless of your role, having great communication skills only improves your ability to lead. It helps you better motivate your team, create a culture of open and honest…

Before I talk about the ways in which women sabotage themselves at work. I want to make it clear that there are multiple reasons why women are held back in their career. Their own mindset is only one of them.       It’s also true that of all the clients I have worked with across…

Self Acceptance Step 2 – Be Kind to Yourself Following on from my last blog Step 1, Knowing Yourself, I hope you have a clearer understanding of exactly who you are. Step 2 is about being kind to yourself. I find that a lot of my clients have created a lot of standards and rules for…