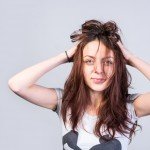 Do you find yourself going over and over negative experiences that have happened or worrying about what could happen in the future? Perhaps you analyse everything you said or did in case you’ve upset somebody or in case others judge you for it?

This analysing of situations and ruminating on negative thoughts and feelings is generally more common in women than men.

Part of the reason for the gender difference is that women tend to be more emotionally connected to others and so worry more about what others think. We also have a higher emotional awareness due to both our genetics and to the messages we picked up from society as children about our role as a nurturer.

Jenny was a client of mine and her mind used to continuously buzz and whirr with her own overthinking. She would constantly focus on the past and the various wrongs she believed had been done to her as well as worrying about what that meant people thought of her.

This overthinking and analysing meant she found life incredibly difficult and exhausting and she often found it hard to make decisions or find solutions to her problems.

“I still have negative thoughts, but I know how not to engage with them and let them go and as a result I’m feeling more relaxed and happy”

Here are some ideas to help you if you recognise yourself as an overthinker:

A study of women’s confidence commissioned by vitamins, minerals and health supplements firm Healthspan was announced this week.  The study was reported in the press below:   The research of 2,000 females aged 50 and above found levels of confidence are low among one in 10.     The results suggested that a lack…

This week I’ve had 3 new clients starting and also been working with my current clients. Like all of us, these wonderful women have their own Inner Critics. The harsh, negative words the critic uses, and the situations in which it speaks up, may be different but, the result is the same. It holds them…

When I worked in the corporate world I remember the pressure I felt under to get promoted and be successful.   I’m not sure if that was driven by my own beliefs, by peer pressure or the culture in the company. But I do know it affected my confidence to go for career success.   One…

When did you last have to start a difficult conversation with a peer, your boss or a client? Disagreeing with someone and potentially causing a conflict can be a scary and an anxiety provoking idea. You know you ‘should’ have that conversation, but wouldn’t it be easier to avoid it or let it go? It…

‘10 Things You Like About Yourself’ is an exercise I use with some clients to develop a positive self-perception and build their self-esteem.   It sounds very simple however it’s more about the process they go through to make the list, than the exact words they use.   One client of mine, Jane (she gave…

If I look back to my much younger self with the benefit of hindsight, there are many things I might do or say differently. More importantly there are some key messages about confidence I’d want to share with the less experienced version of me.   Trust yourself I grew with a secure and protected childhood,…