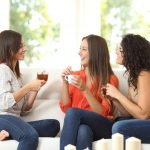 If you really listen to other women in conversation you’ll probably notice how polite, kind and ‘nice’ they are to each other.

This is certainly not a bad thing, but in the workplace is it stopping their ideas from being heard and acted on?

Most women feel a pressure to conform to the feminine stereotype of being flexible, conciliatory and ‘nice’. This pressure can be subconscious and is usually as a result of conditioning from family, school and society.

As a result, you’ll notice a number of little differences between male and females speech patterns. These differences are women’s way of saying something, whilst making sure the other person is okay with it.

This isn’t a problem unless the woman is trying to make an important point or convey a strong message because then they can make you sound tentative or lacking confidence.

3 of the top undermining speech habits you may hear women use are:

You might feel that without these and other speech softeners people are going to think you’re too direct and not empathetic.

However, if you convey warmth in your body language and voice (which make up 93% of a messages communication) you can come across as confident as well as good-natured and trustworthy

If you’d like to find out more about the undermining speech habits we use and how to communicate powerfully, then book a chat with me at www.speakwithjo.com

As a Confidence Coach, you’d expect me to have a lot of ideas about how to build your confidence. But I’ve never thought about listing some of my favourites before. So here are 32 of them and do let me know which ones appeal to you. Learning is good for self-esteem and confidence so choose…

I can still remember the excitement and anxiety I felt when I coached my first paying client. I knew all the theory and had practiced on many willing guinea pigs but the fear of “putting myself out there” was still very strong. Which was actually quite ironic, as I was a starting a business as…

Grief isn’t just about some one dying! Grief and grieving are the natural response to a major loss and part of the healing process. But any type of loss can cause feelings of grief, sometimes when you least expect it. Having recently lost my fabulous Mum to cancer, I have realised that grieving is a…

Do you have great expectations of Christmas? Do you see the warm and snuggly adverts of happy families and believe your Christmas will be just like that?   It’s very unlikely that many of us will achieve our idea of a perfect Christmas, but that doesn’t mean we can’t still have a fabulous time.  …

You might be surprised to hear that in a survey of professional workers only 43% said they were satisfied and happy at work.     I find those figures quite shocking.   From my research and work with thousands of women I’ve found the key thing that makes people negative about their career is the…

My favourite speech maker is Winston Churchill. He might not have been the best at articulation but he made up for it with his ability to speak like a leader. It was his descriptive language and strong emotion that created such a powerful impact. These days because of mobile phones and virtual meetings, unless you…